It’s been awhile since I’ve been on here, but I’ve been so busy in the kitchen, cooking up a storm.  Whether it’s for a birthday party, wedding, or funeral, I’ve been baking for it.  Allow me to rewind though.  On Easter, I was able to go to a local baking store and stock up on flavors and colors for all of the craziness that is going on this month.  However, I did still have time to bake up some yummy treats for my family.  There is the butternut squash with cinnamon buttercream frosting,

Yeah, that just happened.  Then, since I didn’t have anything the weekend before this past one going on, other than a stellar visit from a friend whom I haven’t seen in a long time, I took the time to try out a new idea.  Strolling the aisles of Trader Joe’s, I stumbled upon some salted caramel sauce I knew it had to incorporate it into a cupcake somehow.  I didn’t want to change it too much so I made a devil’s food cupcake with a caramel buttercream with the salted carmel drizzled on top. 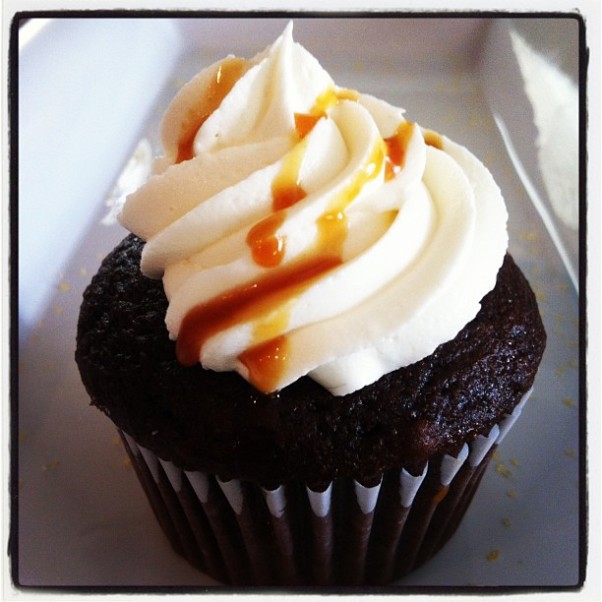 And then the craziness began.  I’ve been baking a few cupcakes here and there for birthdays or trying out designs but this weekend, I baked for a party.  There were a total of three separate cupcakes that are all not only tasty, but nice to look at.

They even look cute when you put them all together!

This week is even going to be crazier than the last.  I’m doing a wedding on Saturday and then a funeral on Sunday.  I’m going to try and get as much prepped ahead of time as these are both for friends of mine.  I’ll make sure to take lots of pictures and share with you next week!

“I’ve never met a cupcake I didn’t want to get to know better.” – Jasinda Wilder